Many people don’t have any goal. The truth is, they are often afraid of failure. So they simply don’t set anything.

However, when we don’t set anything, we don’t fail, but we also don’t win. And more important, we don’t learn.

Here is a list of some people who failed : Steve Jobs, Einstein, JK Rowling… Inspiring, no? It might be worth taking the risk to fail, don’t you think so? What if you believed that anything is possible?

This is why you can set your goals game.

Start writing down your goals for in 10 years. Who do you want to be then? How do you see your life? Try to cover different parts of your life : private, career, money, adventure… and don’t restrict yourself. Think that anything is possible.

Then, you can draw a departure line, and an arrival line. Create little bubbles, and write down your goals when you think you want to achieve them. And the most important : have fun !!!!

You can then also do it for in one year. 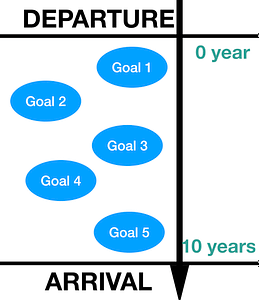 And then you take actions

Actions taking is so important.

Setting goals, and visualising them allow you to start taking actions to accomplish them. And to finally create the life you want!

You can have a look at other Body Mind Co videos here.

I also recommend to listen to The Life Coach School podcast.